The Amano shrimp vs. ghost shrimp have sparked debates and discussions among aquarium owners.

You must be thinking, why, right?

Amanos and ghost shrimp look similar and are the most popular shrimps present in community fish tanks. They share some similarities, but there are differences too.

Amano Shrimp Vs. Ghost Shrimp at a Glance

The main differences between Amano shrimp vs. ghost shrimp are:

Some people have trouble differentiating Amano shrimp from ghost shrimp. Although they look similar, they have notable differences. 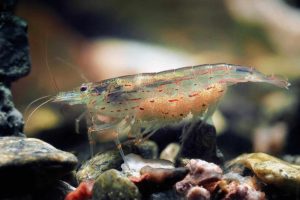 Amanos or Yamato shrimp have a translucent body that you do not see through.

They have grayish, brown, or red colors, with some being bluish. These color variations are due to the Amanos diet. For instance, Amano shrimp that feed on Cladophora algae are usually bluish.

Amano shrimp grow to reach 1-2 inches long in terms of size. Female Amano shrimps are larger and can reach 2 inches, while the males grow to 1 inch. 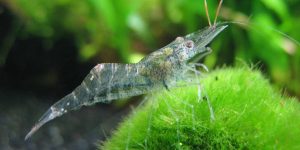 These shrimp have faint colored dots on their body and two pairs of antennae. But there is no definitive way to distinguish a male ghost shrimp from a female. They have long, sharp claws that can grab prey firmly.

Unlike Amano shrimp, the ghost shrimp size is relatively smaller. Ghost shrimp grow to reach 0.5 to 1.5 inches, with none of the sexes outgrowing the other.

The Amano shrimp and ghost shrimp in similar yet different water conditions.

Amano shrimp are a hardy species and can live in waters with temperatures between 68 and 86 degrees. They are more active in warm temperatures, but that does not mean they do not adapt to cold water. These shrimp also require their tank water to have a pH of between 6-8 and hardness between 6-8 dKH.

When housing the Amano, the basic rule is to provide 2-gallons for every shrimp. This means you should have at least a 10-gallon tank for five shrimp, but a bigger one would be preferable.

The tank should also be highly oxygenated and free of toxic ammonia. The levels of ammonia, nitrites, and nitrates should sit at 0 ppm.

Glass shrimp native to the Southern USA water bodies. Unlike Amano shrimp, ghost shrimp solely live in freshwater. If you were to house them in a saltwater tank, they would die.

Ghost shrimps live in water temperatures between 65 and 82 degrees F. The pH levels should range between 7.0 and 8.0, while the water hardness range is between 3-12 dGH.

When housing ghost shrimp, the general rule of thumb is to provide one gallon for every shrimp. This means they need less space than Amano shrimp since a 5-gallon tank can accommodate five ghost shrimp.

The tank should have low levels of toxic ammonia and nitrates. However, these shrimp help clean the tank by eating waste. Even then, filter the tank water twice a month to promote their health. Also, perform a 25 percent weekly water change and remove any dead shrimp.

Ghost shrimp are much easier to breed than Amano shrimp. The shrimp will start mating if you provide them with stable water conditions and offer a proper diet. Breeding takes a shorter period when ghost shrimps are housed alone.

Here is a step-by-step guide on how to breed ghost shrimp.

Step 2: Provide one male shrimp for every female to fertilize the eggs.

Step 3: Move the females to a breeding tank to improve the odds of the eggs hatching. (Stress can make the female drop the eggs).

Step 4: Ensure the water temperatures are between 72-80 degrees.

Step 6: Remove the female ghost shrimp from the breeding tank as they may eat the hatchlings.

Breeding Amano shrimp in captivity is challenging. In the wild, Amano shrimp mate in freshwater, and then the females move to brackish water to lay the eggs.

Simulating these conditions can be challenging, but as the passionate fish keeper you are, you can breed Amano shrimp in these easy steps. The first steps involve preparing the breeding tank.

Step 2: Aerate the water with an air stone or filter.

Step 5: Provide extra food (a high-protein diet) to promote breeding. The additional food helps the shrimp get in the mood to mate.

Step 6: The shrimp will naturally mate under stable conditions. The females release pheromones to attract males to mate. After fertilization, the female Amanos lay the eggs below her stomach.

Step 8: Transfer the female into a jar or hatching tank. Hatching takes 18-24 hours.

Step 9: Prepare a separate 1-gallon saltwater tank. The recommended salinity is 17 to 30 ppt.

Step 10: Use a pipet to transfer the larvae from the hatching tank to the saltwater tank.

Step 13: Start performing water changes after a month as the Amano larvae grow.

Step 14: When the larvae start to morph, perform a 50% water change on the first and second day so the baby shrimp can transition to freshwater conditions.

Ghost shrimp only live for six months to a year. These shrimp do not get to 6 months in most cases because they are quite sensitive to fluctuating water conditions, and most die prematurely. However, the lifespan of Amano shrimps is two to three years if their shrimp tank has optimal conditions.

It is worth noting that Amano shrimps take up to 5 months to be fully mature. In contrast, ghost shrimp only take 1 to 2 weeks.

Ghost shrimp are relatively cheaper than Amano shrimp. This is because they are easier to breed. The average price for a ghost shrimp is $1, while Amano shrimp costs between $3-$5.

What Are the Similarities Between Amano and Ghost Shrimp?

Amano and ghost shrimp get along well with other fish species. They are shy and will often hide if they feel unsafe. If you maintain their ideal living conditions, you may catch them playing around the tank.

Amanos and ghost shrimps enjoy hanging out with their species, chasing each other, playing hide and seek, and foraging through the substrate. Moreover, these shrimp species are most active during breeding time.

In most cases, the ghost shrimps’ peaceful nature becomes overshadowed during meal times. This is the only time they get greedy, and it is not unusual for ghost shrimp to get aggressive towards Amano shrimps.

Both Amano shrimps and ghost shrimps are omnivorous. Their diet consists of plant and meat matter.

Many fish owners keep Amano shrimp as tank cleaners who consume different algae. Amanos eat black beard algae, hair algae, and string algae. They also eat any dead plant matter, but you can supplement this with green vegetables like zucchini and blanched spinach.

On the other hand, ghost shrimp are scavengers who do not choose their next meal. Their claws come in handy to find tiny morsels of fish food buried in the substrate.

Both shrimp species are tank cleaners with a slight difference.

Amano shrimp consume algae faster than ghost shrimp. However, they rarely eat other waste. Meanwhile, glass shrimp also eat algae at a slower rate than Amanos, but they eat everything that crosses their path, including fish poop. Molting is an essential process for these two species because it signifies healthy growth. The shrimp molt their old exoskeleton to make room for their growth.

When adult amanos and ghost shrimp are kept in healthy conditions, they molt once every month. However, young shrimp and larvae molt more frequently than adults. Baby shrimps in the larval stage molt every day, while juveniles shed their skeleton in 1 or two weeks.

Like other shrimp, Amanos and ghost shrimp are fragile during molting. You must provide hiding spots so your pet shrimp can feel safe and comfortable. Live plants and several shrimp tubes can help offer privacy.

Decorations are a must-have for Amano and ghost shrimp. These shrimp are shy and spend most of their day hiding. Decorations provide hiding and de-stressing spots.

When purchasing tank decorations, avoid copper decors. Copper is lethal to shrimp, even in tiny concentrations.

In addition to aquatic plants, you can also add rocks, small caves, pebbles, and substrate. Choose fine grain substrate as it will not hurt and damage the shrimps’ antennas. 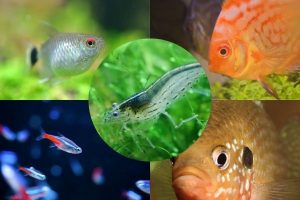 Ghost and Amano shrimps are peaceful and gentle creatures who can share a fish tank with other peaceful aquatic animals.

You can keep your ghost and Amano shrimp with tetras, danios, cherry barb, kuhli loaches, and hatchet fish. Avoid large, aggressive tank mates like betta fish as they may eat your shrimps.

Fun Fact: If you are interested in learning more about ghost shrimp, then read our article Ghost Shrimp: Tips And Hints In Caring For Your Spook Pet for added information.

Can Amano and ghost shrimp live together in the same tank?

It depends on the temperament of your ghost shrimps. Ghost shrimp become aggressive towards Amanos at times. So, if keeping Amano shrimp with ghost shrimp is your plan, ensure the Amanos are bigger than ghost shrimp.

Do I need to feed my shrimp?

Yes. Amano shrimp are the best algae eaters, while ghost shrimps are scavengers who eat anything they find at the bottom of the tank. They may not demand much food, but it is best to supplement their diet occasionally.

Do ghost shrimp eat other shrimp?

Yes. Large ghost shrimp will eat small shrimp because it matches their omnivorous diet. These shrimp even eat their babies.

Before sharing with you my final thoughts, let me entertain you with this short video of how to differentiate between Amano shrimp and Ghost shrimp:

Amanos and ghost shrimp have similar diets, temperaments, and water parameters. But they are different in terms of their general appearance, size, lifespan, and breeding conditions.

Both types of shrimps make suitable tank mates for other fish species and would be an excellent addition to your community tank.

Is there something else you want to discuss in this topic? Let me know below in the comments box! 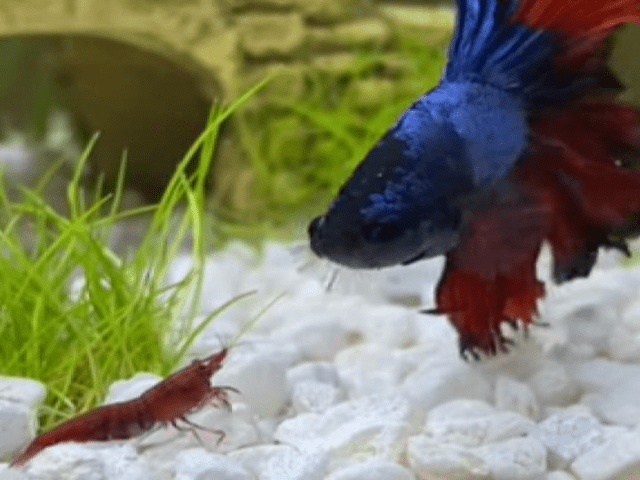 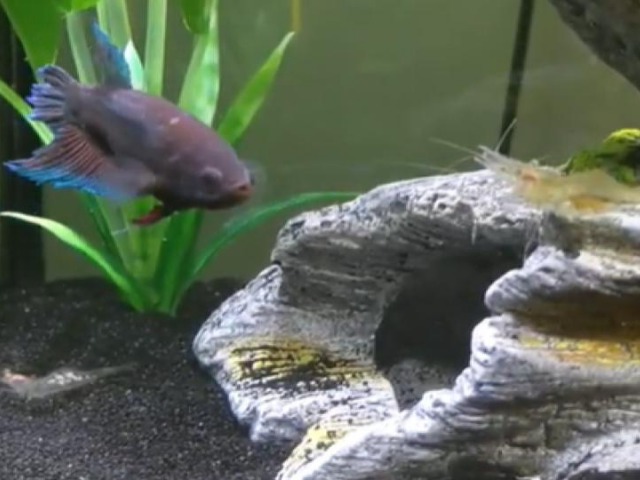 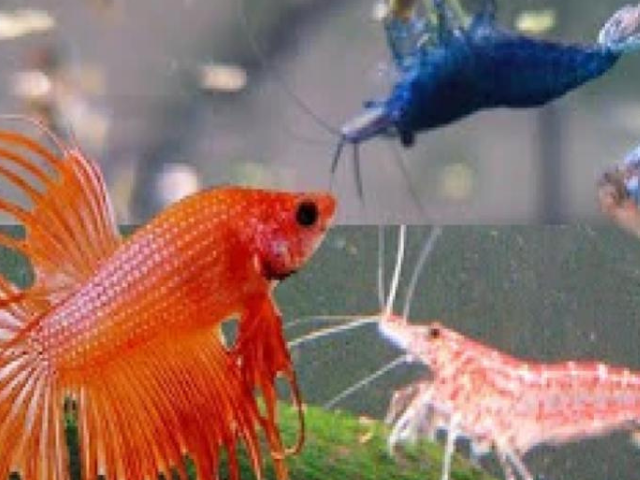