When I first started aquarium keeping, just about everyone said angelfish are some of the most peaceful fish for a home aquarium.

I quickly found out they meant the way the fish glide gracefully around the tank as opposed to their actual temperament.

As an answer to the question “Are angelfish aggressive”, I’d have to say yes and no. They aren’t necessarily built for aggression, however, they can get into fights and have problems. 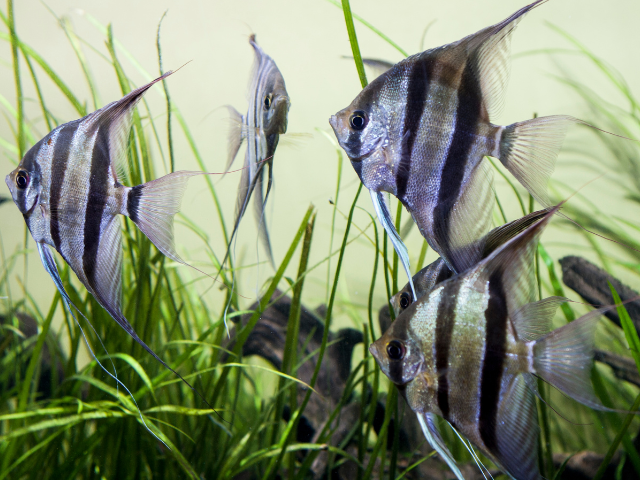 When people ask “Are angelfish aggressive?”, I tend to think they are asking about angelfish behavior from the wrong perspective.

In nature, there is always a tangible reason why animals behave in a particular way.

Unless the animal in question has been driven neurotic because of contact with humans.

The same applies to angelfish.

When they aren’t constrained by tanks that are too small, excess tank cleaning-related stress, or other problems, they aren’t aggressive fish.

That all being said, if you see angelfish aggressive behavior such as fighting, color flaring, nipping, or chasing, you will still need to solve the problem within the limitations of an aquarium setting. 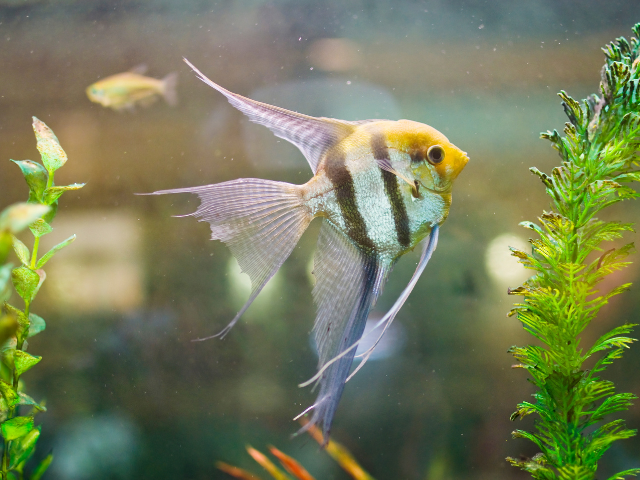 When it comes to comparing fish intelligence, there is no question that angelfish will outstrip bettas and tiger barbs.

Angelfish combine the intuitive emotional intelligence of bettas with the foxy, wiliness of tiger barbs.

These creatures can and will easily assess what you want and seek to manipulate you using aggressive behavior toward other fish in a community tank.

Usually, angelfish will either want more space or hunting opportunities.

Here are the main reasons why an angelfish will show aggression:

Tank is too Small and Lack of Territorial Markers

Even though angelfish live in groups, that doesn’t mean they don’t like having their own territory. 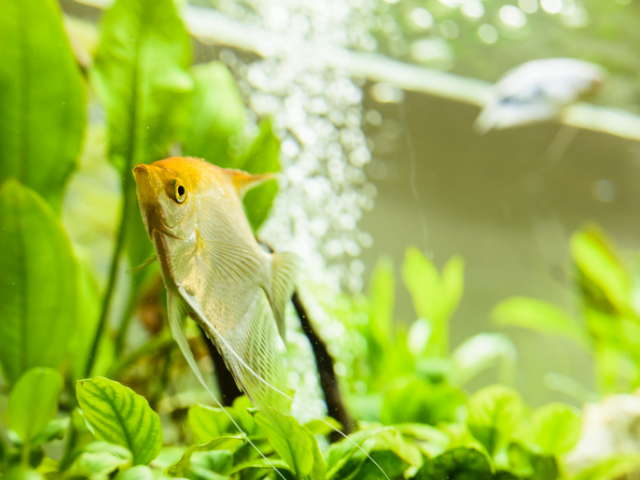 If the tank is too small, there won’t be enough room for each fish to have enough room to feel safe and comfortable. This will result in increased levels of territorial and dominance aggression.

Adding more plants or other ornaments may help as it provides visual boundary clues to other creatures in the community tank.

Angelfish are intelligent, logical creatures. When they are bored, they can get stressed out.

While they aren’t as emotional as bettas, they do have interests, objectives, and a mind that need stimulation. When there is nothing else to do, they can and will pick a fight with their tankmates.

For example, even though female angelfish aren’t part of a bonded pair, they will still lay eggs. If you disrupt that nest, the fish will become aggressive. 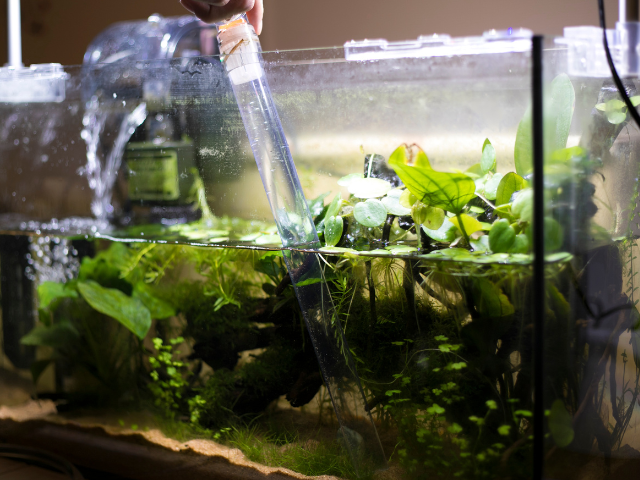 Excess tank cleaning may also create sudden changes in water chemistry that upset the fish and lead to aggression.

The best way to eliminate stress-related aggression is to avoid disrupting the water.

Use chemical and filter-based water adjustments instead of water changes whenever possible.

Changing the Tank Around

More than a few aquarium keepers claim that randomly changing the position of ornaments and plants will stop an aggressive fish.

All this does is cause the angelfish to feel stressed out. Once they overcome their fear, they will go right back to nipping and chasing.

At best the fish will be quiet for a few hours to two days.

At worst, one or more of the fish will experience an immune system collapse and wind up showing signs of infection. This, in turn, can kill off the whole tank of fish. 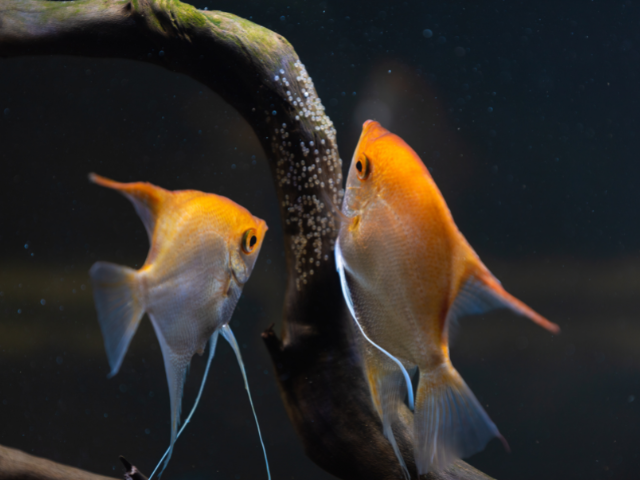 When a male and female develop an interest in each other, they will go through an aggressive period before they move on to nesting and spawning.

Unlike bettas that require more tactile stimulation, angelfish are perfectly comfortable with watching things for hours on end. Some ideal toys for angelfish include:

When angelfish become ill, they will clamp their fins and hide. At this stage, other angelfish will nip at them and display other signs of aggression.

The best thing you can do to save that fish is put it in a temporary partition. This will prevent injury to the sick fish.

Since you will have to medicate the whole angelfish tank for whatever infection is present, there is no point in moving the fish to a hospital tank.

Once the illness is gone, freshwater angelfish may go through another round of dominance aggression.

If this doesn’t resolve in a day or two, you may need to permanently isolate the weakest fish if all the others are bullying it.

On the other hand, if you are back to just one fish bullying the rest, you may need to isolate that one instead.

Start off by figuring out which fish is doing the most bullying.

Is the fish bigger or stronger than the others? Is this a newly established tank?

In a situation where two fish are evenly matched, the fighting may get much worse. You may see the two fish locking mouths constantly, competing for food, or chasing all the time.

You may have to move the more aggressive one into his or her own partition within the same tank. Or, you can move the fish to another tank.

Depending on the age of the fish and if long-term undersized tank neurosis is present, it may or may not be possible to establish a second group around the isolated fish.

Before buying more fish for this purpose, make sure you have enough room and resources for two tanks of angelfish.

If you can’t do that, then simply keep the angelfish isolated. Even though angelfish tend to be social creatures, they will do just fine as solitaires.

If the fishes have only been in the tank a few days, the aggression should resolve quickly.

Typically, once one fish establishes dominance, the group will maintain order until the dominant fish weakens.

This may occur, in part, because fish release hormones and other molecules that signal other fish about the wisdom of fighting or staying peaceful.

You may still see signs of aggression such as nipping, chasing, and increased coloration.

As long as they aren’t leaving bruises and everyone is eating well, there isn’t too much to be concerned about if you see angelfish fight.

There are few things worse than male and female angelfish with romantic problems.

As you can see in this video, both fish can get feisty.

Male angelfish will get paranoid and chase off other fish of the opposite gender even as they nip at their intended mate.

If you’ve ever seen young angelfish courting before they form a stable pair, you might be led to wonder how the species ever manage to procreate.

Once the female starts showing interest in flat surfaces that the male angelfish “owns”, it is time to move them into their own tank.

You can also add a partition so that the pair won’t attack other fish.

This is especially important once they spawn. At that point, both fish will become aggressive and chase any creature that might threaten the eggs.

For the mental well-being of the breeding pair and the physical safety of other creatures in the fish tank, it is best to give the couple a tank for themselves.

Unless the tank holds over 100 gallons of water and is heavily planted, it is not likely to have enough room for the couple and other tankmates.

By contrast, bonded angelfish can live happily as a couple in a 20-gallon aquarium so long as it is a tall profile fish tank.

Fun Fact: Let us turn our attention to another friendly-looking fish and know if this specie share similar characteristics with that of an angelfish. Read our article on Are Guppies Aggressive: We Look Into Their Traits & Behavior and tell us what you think!

No. You are better off isolating the fish that has achieved dominance but still persists in violent bullying of the other fish.

Before you isolate the fish, make sure it isn’t related to mate selection as opposed to being driven neurotic because of an undersized tank.

If I have a mated pair of angelfish, will they produce viable offspring?

It depends on environmental factors.

Both parents will take care of the eggs and the fry.

Even though there is no such thing as an “angelfish bite humans” scenario, these creatures still won’t be happy if you disrupt their nest.

If the setting is stressful they will consume the eggs.

It is best to watch from a distance and not let the fish know you are watching their activites.

Are Angelfish more aggressive among themselves or towards other fish species?

You are more likely to see aggression among their own group, especially if something disrupts the order of dominance.

If the angelfish are bored or stressed, the best answer may involve adding more toys or changing how you maintain the tank.

There are still times when isolating one or more fish is the only way to solve angelfish aggression.

This includes having a breeding pair in the tank, or one of the fish has become psychologically disturbed.