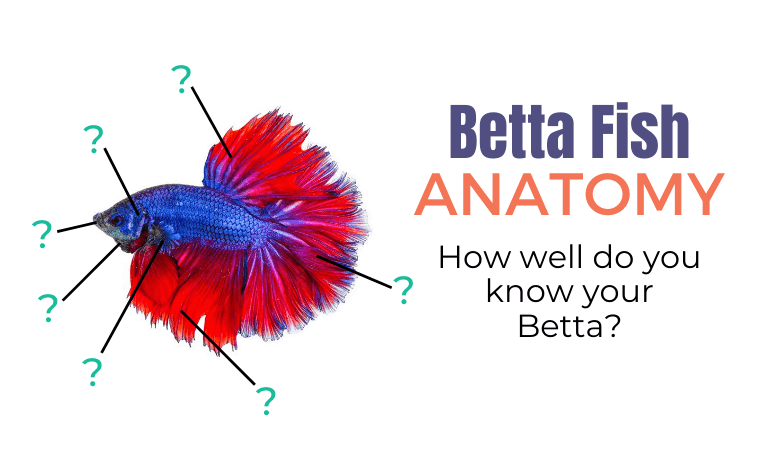 So, have you ever wondered how each part of these beautiful fish come together to create the little guy you love? In this article, I would like to go through the betta fish anatomy diagrams below and point out some of the key body parts of a betta.

On the outside of a betta fish

Betta fish have a very streamlined body shape. This allowed the wild bettas to swim fast and effectively through the water and catch prey.

You may have noticed that the mouth of a betta fish is upturned this allows it to catch prey on the surface of the water (such as mosquito larvae and other small insects). The mouth of the betta does also contain tiny teeth, nothing that could harm a human but a bloodworm on the other hand… well you will soon see a fighting fish!

The tiny scales are there to protect the betta fish’s body and aid in swimming.

Betta fish scales are transparent the beautiful and vibrant colors actually come from the skin below.

The fins of a fish are used to maneuver through the water, keep stable and maintain balance.

The caudal fin (back betta fishtail) is the fin that is used to propel the fish forward providing the force for a sudden burst of speed.

Selective breeding over the years has lengthened the caudal fin. These longer delicate and beautiful betta fish tails we now know have however slowed down the movement of the domestic betta fish in comparison to its wild ancestors.

Pectoral Fins also provide stability and help the fish to steer along with the pelvic fins.

As with all fish, the gills are used to extract the oxygen from the water.

Water goes through the mouth and then across the gills. Blood flowing through the capillaries of the gills absorb the oxygen from the water.

The betta fish’s eyes are there obviously for vision/sight. A betta fish’s vision is called monocular vision. This means that their eyes are on the opposite sides of their head and both eyes produce a different image. Their eyes do not react well to quick changes in brightness and they can focus on objects up to a foot away.

A look inside a betta fish anatomy

The betta is one of the few fish with a labyrinth organ. This organ allows the betta fish to take oxygen from the air above the water’s surface. This organ has been evolved through the water conditions betta fish have lived in in the wild. Many of the shallow streams, swamps, or rice paddies that betta fish have evolved in would dry up, creating small pockets of poorly oxygenated water that the fish needed to survive in.

The labyrinth organ allows the air which the fish takes from the surface to be directly absorbed into the bloodstream. Pretty cool for a fish!

This organ needs to be able to be used by the betta from time to time. Please ensure your water level/tank lid allows the fish to come to the surface for a breath of air while also bearing in mind that bettas can jump, especially if you want to keep Betta in your dorm!

The betta fish has a tiny stomach, around the size of its eye. Please do not overfeed your fish as it can cause swim bladder disorder. Many owners advise a day without feeding every week or so to aid the digestion of the food and to reduce the risk of bloating and constipation.