Feeding your betta fish bloodworms is a great way to provide them with essential nutrients. Just like other carnivorous fish species, betta fish would enjoy a tasty snack of blood worms.

As is the case with any type of fish food, familiarizing yourself with how feeding your betta bloodworms can impact its health is vital. This includes benefits, risks, and optimizing the quantities. Continue reading to learn more!

Bloodworms as a Food Source for Fish Species

Aquatic bloodworms are divided into two types: the Chironomidae family and the Glycera genus. Bloodworms classified as Chironomidae are those you can find in your local pet store. However, these are actually midge flies in their larval stage, not worms.

You can easily distinguish bloodworms from their unique bright red bodies.

The hemoglobin in bloodworms can be seen through their exoskeleton, hence the red color.

Bloodworms can make a great source of food for your betta fish, but that doesn’t mean you should feed them only bloodworms.

Can You Feed Your Betta Fish Bloodworms Safely?

You can definitely need betta fish bloodworms, but there are some risks that require you to be extra cautious. First, make sure that you only get your bloodworms from well-known pet stores to make sure that the quality of the bloodworms is good enough.

It’s also important that you keep the water that the bloodworms come in away from your aquarium. This water likely contains parasites and other nasty creatures that can severely hurt your bettas.

It might be a good idea to rinse the bloodworms before introducing them to your tank. This way, you can be sure that there aren’t any parasites or debris particles on the bodies of the bloodworms.

There are 3 types of bloodworms to feed your betta fish: live, freeze-dried, and frozen bloodworms. Familiarizing yourself with the pros and cons of each type is essential for creating a varied diet plan for your betta fish.

Here’s what you need to know about each saltwater fish food type:

Live bloodworms are the premium class of bloodworms — it’s the most natural form of this food type. They provide your bettas with tons of benefits that aren’t just nutritional. When a betta sees some live bloodworms, it automatically goes into hunting mode, stimulating its brain and keeping it active.

This makes live food a great choice for overweight or recovering aquarium fish since they’ll be intimidated into chasing the bloodworms.

In case of uneaten food, your bettas or other tank mates will probably eat them within a day or so. However, if you notice that the bloodworms are still there after one day has passed, you must remove them from the aquarium to prevent contamination.

The sight of bloodworms also acts as a signal for your bettas to mate. So, if you intend to breed your betta fish, love bloodworms would make an excellent choice.

However, live bloodworms can’t be stored for longer than a couple of days in the fridge. Most local pet stores sell live bloodworms in large quantities, so if you don’t have a large aquarium, you’ll probably end up wasting lots of bloodworms.

Also, keep in mind that there’s a small contamination risk in live bloodworms compared to freeze-dried foods and frozen bloodworms. Nevertheless, if you wash them properly, they should be safe enough for your bettas.

One of the biggest advantages of freeze-dried bloodworms is that they can be stored for longer periods compared to live blood worms. In addition, even though they shrink in size a bit, they can grow back into their original size if you dip them in water.

Additionally, freeze-dried bloodworms float effortlessly on the surface of the water. Bettas are top feeders, so they won’t likely eat if the food sinks.

Unfortunately, freeze-dried bloodworms aren’t as nutritious for your betta fish as live blood worms. This is because the freeze-drying process wastes most of the nutrition inside the bloodworms.

It’s also worth noting that there are two grades of freeze-dried bloodworms: Grade A and Grade B. We’d recommend going for Grade A if you want to maximize the benefits of the bloodworms, as well as keep your aquarium contamination-free.

Frozen bloodworms are the best of both worlds between live and freeze-dried bloodworms. They can be stored for longer periods than live bloodworms without losing much of their nutritional benefits. A new pack of frozen bloodworms can stay in your freezer for up to 6 months.

On top of that, frozen bloodworms carry the lowest risk of contamination compared to live and freeze-dried food. Just make sure that you defrost the bloodworms and split the frozen slab or cube into smaller bites before introducing them to your betta fish.

It’s also important that you don’t keep frozen bloodworms in your fish tank for more than a couple of minutes. Add small pieces incrementally to the tank until you get a feeling of how much your betta can eat at a time.

Fun Fact: If you are not into feeding your betta buddy bloodworms, then you could opt for other food items available on the market. Read our article on “Can Betta Fish Eat Tropical Flakes? We Investigate Its Diet.” for more information!

How Many Bloodworms Are Safe for Betta Fish?

As a general rule of thumb, feeding your betta 1-2 bloodworms is the sweet spot. It’s also not advised to feed your betta fish more than 2-3 bloodworm meals per week.

Despite having a high protein content and too much fat, bloodworms aren’t meant to be your bettas’ primary source of food. Feeding your betta fish a balanced diet that also contains pellets and flakes is essential for them to thrive.

Possible Complications of Feeding Your Betta Too Many Bloodworms

Too many bloodworms for betta fish can cause severe complications, which include:

Throwing a large number of bloodworms into your fish tank is a big no. Your bettas will only be able to eat a few of them, and the rest will simply stay there until they rot, potentially causing an ammonia spike in the water. High ammonia levels in your tank can be toxic to your betta fish. They could become ill, or worse, die.

And while it’s true that the beneficial bacteria in the aquarium feed on the nutrients that come out from the rotting food, the high content of these nutrients in the fish tank can lead to ammonia poisoning.

Not to mention, rotten bloodworms release phosphates and nitrates that can cause algae to grow in the tank. If you’ve never experienced algae growth in your aquarium, you need to at least familiarize yourself with how hard getting rid of these algae can be.

Plus, uneaten bloodworms will make your aquarium cloudy, forcing you to change the waters more frequently than your set schedule.

Constipation is the most common side effect of feeding your bettas too many bloodworms. It also raises the risk of swim bladder disease, a complication that affects a betta’s ability to swim, causing it to swim upside down.

Feeding your betta bloodworms is always accompanied by the risk of a parasitic infection, especially if you feed them live blood worms. This is the number one reason why many aquarium fish owners prefer breeding bloodworms at home, usually in a separate tank.

This allows them to track the health of the bloodworms before introducing them to the fish tank. Growing your own bloodworms only makes sense if you have lots of bettas, though.

Alternatively, you can just opt for live worms sold in separate aquarium-specific stores. This way, you can be more trustful of the health of the bloodworm farms before feeding your betta from them.

Another trick is to check what they’re feeding the tropical fish in the store. If they’re using the same bloodworms being sold, it can be a good sign that they’re safe.

Nevertheless, you might want to stick to frozen food or freeze-dried worms to be on the safe side. They’re not 100% safe, but the risk of a parasitic infection is much lower than in live blood worms.

Sometimes, your betta fish just won’t eat the bloodworms you throw for them. No matter how hard you try, they don’t interest them.

That’s actually a pretty common occurrence. If your bettas eat other types of food normally but turn their backs to bloodworms, then there’s nothing to worry about.

Betta fish can be picky at times, especially when it comes to what gets into their tiny mouths. But hey, even we humans are picky eaters and don’t like every type of food on the planet, do we?

However, if your betta isn’t eating anything, be it bloodworms, pellets, or flakes, then you’re likely dealing with a more serious problem that needs your attention. It could mean that your betta is suffering from an infection, parasite, or disease.

Double-checking the water parameters and changing the waters might be a good first step here. Afterward, proceed with the other steps necessary to properly maintain your aquarium.

Can bettas live on freeze-dried bloodworms?

No, bettas can’t live on freeze-dried blood worms. Bloodworms that are freeze-dried lack much of the nutritional value found in live bloodworms, so they’re not enough for your betta.

Nevertheless, bloodworms aren’t supposed to be your betta’s diet staple. You can get the most out of bloodworms by feeding your betta bloodworms occasionally as a snack.

How do I use frozen bloodworms for a betta?

To feed your bettas frozen blood worms, get them out of the freezer and let them defrost. You can thaw them by simply pouring some water from your fish tank over the cubes.

Split up the cube and let the juice drain to prevent it from contaminating your aquarium’s water. After that, feed your betta fish small pieces of bloodworms at a time.

Yes, live blood worms can turn into flies. In fact, if you bought a few dozen live worms and stored some of them for more than a few days, they’ll turn into flies, making them inedible for your betta fish.

So that was everything you needed to know about bloodworms for a betta. To sum it all up, occasionally feeding your betta fish some bloodworms is perfectly fine and actually beneficial since bloodworms are from high protein foods.

However, it’s crucial that you limit the quantities strictly by sticking to just a couple of bloodworm snacks a week, even if your betta fish like bloodworms. You wouldn’t like to overfeed your pet and make it sick. 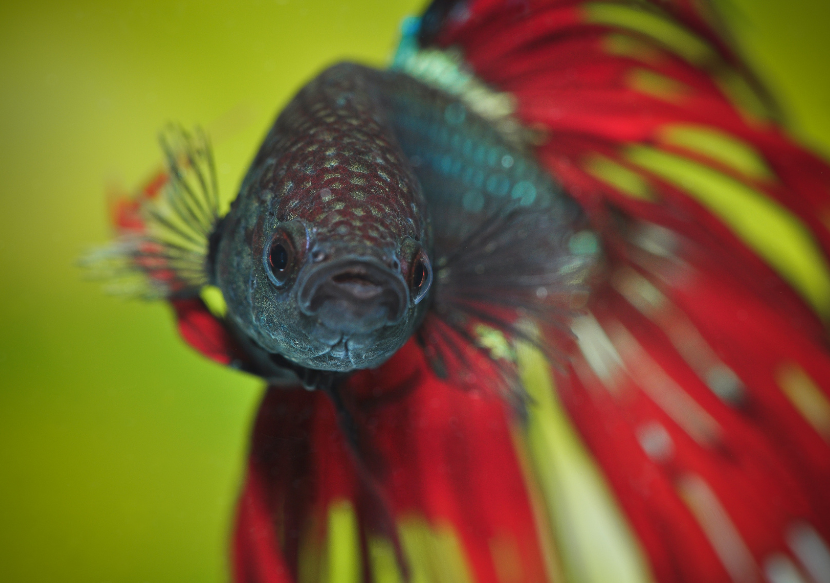 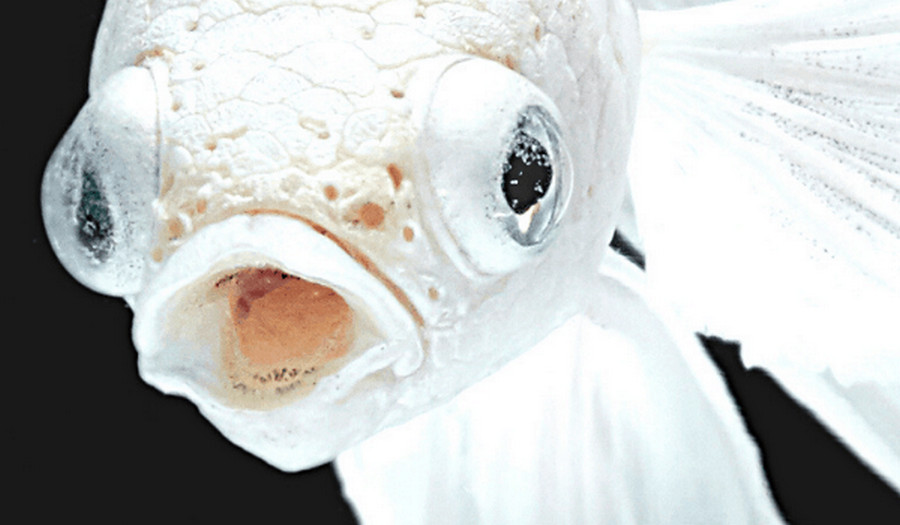