Many fish keepers understand that bloodworms constitute a varied diet that fish need to stay healthy. Meanwhile, beginner and experienced fishermen use these worms as the ultimate fish bait. But other than this, many people cannot share additional details about bloodworms.

So, what are bloodworms?

This guide will provide detailed information about bloodworms. 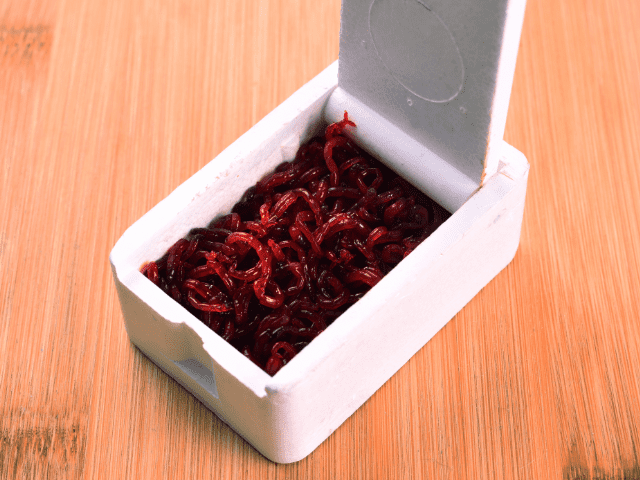 Bloodworms are pale pink or red-colored worms that belong to the class Polychaeta and Glycera genus. Bloodworms live in still, shallow marine waters, and freshwater.

Bloodworms can grow to reach 14 inches. Their heads have four antennas with tiny parapodia that run along their bodies. If your bloodworms grow to 14 inches, they can intimidate and cause damage to smaller fish. Therefore, do not offer large bloodworms to small fish.

These worms can be found in subtidal and intertidal regions with muddy, sandy, and silt-layered bottoms. They can survive in waters with poor oxygen levels and minimal salt content.

Bloodworms have a transparent, segmented body that displays their blood with red iron-porphyrin protein. The high hemoglobin levels enable these worms to survive in polluted water with little oxygen. Most people do not know that bloodworms are the larvae life cycle of the chironomid midge.

An adult midge fly is harmless to other animals and humans.

However, during the larval stage, bloodworms are carnivorous and kill their prey with venom.

The worms deliver the venom through the four hollow jaws in the proboscis to kill small insects, insect larvae, crustaceans, and gulls.

Although bloodworms are predators, they are part of a healthy aquatic ecosystem as prey. These worms serve as a primary source of food for other carnivorous species in the aquatic food chain.

Bloodworms have a painful bite on humans. Their bite may feel like a wasp or a bee sting. Fortunately, it is generally harmless but can result in a severe allergic reaction. In addition, the venom does not affect fish.

Bloodworms are quite useful to fish enthusiasts. They are mainly used for fishing and as aquarium fish food. 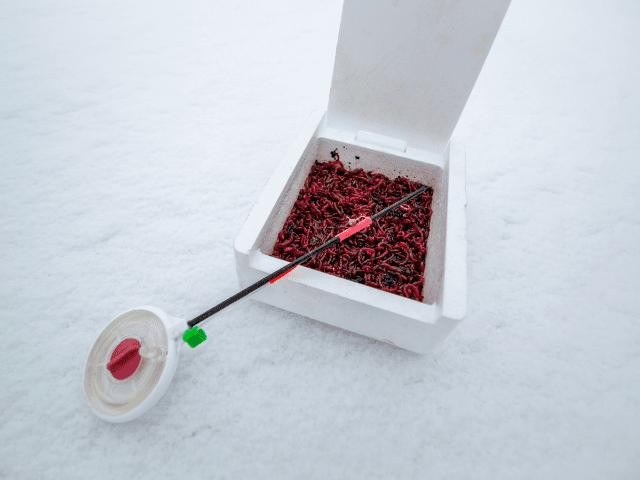 If you go to a fisherman’s market, you will not miss bloodworms. This is because their meaty texture makes them a tasty treat when fishing big predatory fish like trout, perch, flounders, and bass. Bloodworms are effective at reeling in freshwater and saltwater fish.

Bloodworms are rich in protein which makes them excellent fish food. Aquarium fish need proteins to thrive, and they get these proteins in these worms. Moreover, the protein provides boosts of energy.

These worms are a perfect balance from a betta flake or pellet diet, particularly for picky eaters. If you observe your fish are not enthusiastic during mealtimes, a pinch of bloodworms can help trigger activity.

Bloodworms also have a laxative effect on fish.

They can stimulate the digestive system of a constipated fish that has eaten too much dry food.

When raising bloodworms or buying them from the pet store, choose the younger bloodworms as they pose little to no harm to smaller fish.

Other than fish, bloodworms make a great meal for other aquatic animals like shrimp, snails, frogs, and turtles. 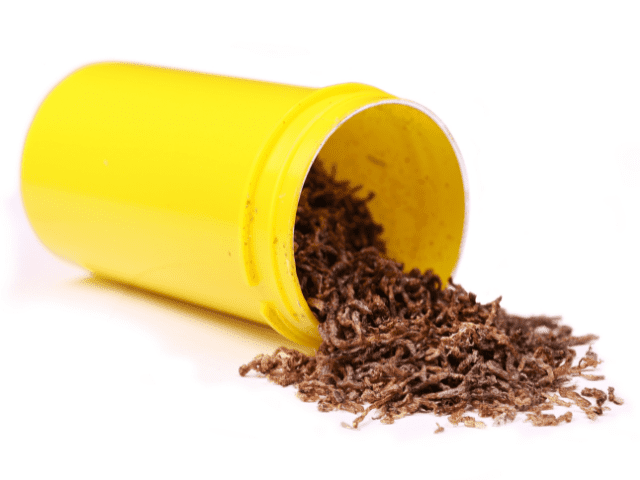 Bloodworms come in three forms; live, frozen, or freeze-dried. Each type has its advantages and disadvantages.

Live bloodworms are wriggly, fresh worms. They are packed with high protein and iron, precisely what your pet fish would eat in the wild.

When you feed your fish live bloodworms, their hunting instincts are activated, sparking their natural behaviors.

Unfortunately, live worms have a shorter shelf life compared to frozen and freeze-dried food. After purchase, you only have 2-3 days to feed your fish before they die.

During storage, ensure the container you use has adequate water at the bottom and a lid. Also, use a feeding cone and a lid when feeding, as these worms can escape the fish tank.

Live bloodworms can harbor parasites or illnesses that can affect your aquarium fish.

This is why we recommend that you only purchase bloodworms from reputable pet stores or bloodworm farms. Also, rinse these worms before feeding your fish. 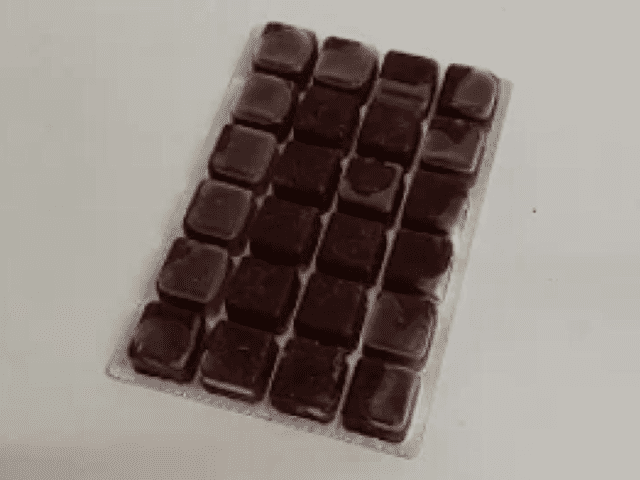 Frozen bloodworms can last up to 6 months, unlike live bloodworms. They are convenient to buy, store, and feed and have a lesser risk of transmitting illnesses to your fish. Freezing kills harmful bacteria reducing the risk of diseases.

Frozen worms are either packed in thin sheets or frozen blocks. Regardless, they are packed with more nutrients and vitamins than freeze-dried bloodworms.

It would be best to first thaw the frozen bloodworms before serving them. Frozen food can cause your fish to go into temperature shock. Additionally, you can individually feed your fish the defrosted food with tongs or conduct mass feeding. Either way, avoid overfeeding, as it can quickly lead to ammonia buildup.

These worms are the cheapest variety of the three and are packed in small plastic tubs. However, they contain fewer nutrients than live bloodworms and frozen bloodworms.

Freeze-dried bloodworms do not need prior preparation time. But, you may need to soak them in water to soften them.

This variety floats on the tank’s surface. So if your fish tank has bottom dwellers, soak the worms for 10 minutes so they can sink. Also, do not overfeed, as the uneaten food can clog the filter or cause your fish to become constipated. 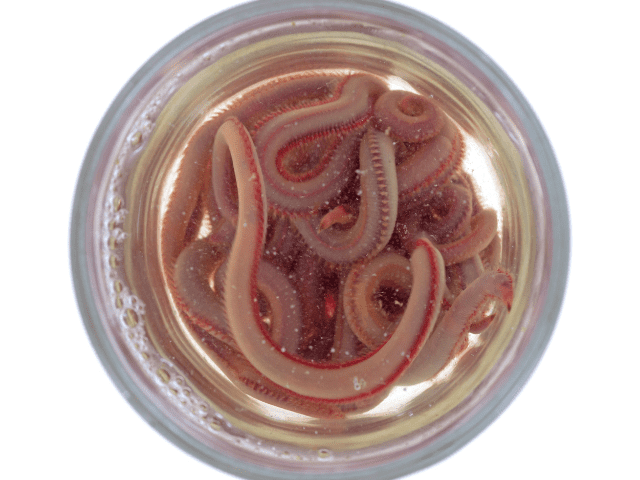 We need to learn the life cycle of midge flies to understand the lifespan of bloodworms. First, the adult flies lay eggs. The eggs hatch into larvae in 7 to 10 days. In this case, the larvae are the bloodworms.

The larva stage lasts for seven weeks, where these worms consume as much organic matter and insects as possible. After seven weeks, the worms enter the pupal stage that lasts three days and emerge as adult midge.

This means that the average lifespan for bloodworms is seven weeks. But do not wait this long. Instead, feed them during the first four weeks of their life cycle.

How To Breed Your Own Bloodworms

If you are not looking to buy live worms, frozen or freeze-dried, you have the option to breed your own bloodworms. Breeding bloodworms is challenging and tricky, but not impossible.

Here is a step-by-step guide on breeding bloodworms.

Step 1: Get a bucket or an old aquarium, soil, manure, and water.

Step 3: Add water to the soil and manure mixture.

Step 4: Add bloodworm eggs to the homogeneous mixture. You can buy bloodworm eggs from a pet store or collect them in a nearby pond where the flies lay their eggs in stagnant water. The eggs look like frogspawn with gelatinous egg sacs.

Step 5: Each week, add little manure as it serves as food for hatched bloodworms.

Step 6: Once the bloodworm eggs hatch, catch them in a net, and rinse them with dechlorinated water before feeding your fish.

Step 7: Leave a few bloodworms to reach maturity so they can keep the bloodworm population growing.

The tricky part about breeding bloodworms is keeping the midge flies. As you can already guess, these flies will fly away once grown. We recommend having outdoor freshwater pools or ponds where these midge flies can lay their eggs.

Types Of Fish That Eat Bloodworms

Most fish, omnivores and carnivores, will enjoy bloodworms as part of their fish food. Both saltwater and freshwater fish species eat bloodworms as a tasty treat.

Examples of fish that love bloodworms are:

These fish have a particular liking for bloodworms. Nonetheless, worms should not serve as the primary diet but as a nutritional addition to the fish’s diet.

Bloodworms are excellent sources of protein and iron. But they do not contain other vital vitamins, nutrients, and essential amino acids that keep fish healthy. This is why you should feed your fish bloodworms twice a week.

If your allergy has severe symptoms, seek professional help from your doctor. Additionally, call your supplier or vet if your fish behave differently after eating bloodworms.

Live bloodworms can bite humans. Their bite is more of a defense mechanism, not an attempt to suck your blood.

Bloodworm bites are painful but harmless to humans. Therefore, always wear gloves when handling these worms.

Where To Buy Bloodworms

Your local aquarium store is your best bet to get bloodworms. However, not all stores supply live bloodworms. Nonetheless, you can buy frozen bloodworm since it contains the same nutrition as live worms. If you are on a budget, get freeze-dried bloodworm.

Other Alternative Foods For Bloodworms

Fish prefer other live foods in addition to bloodworms. You can feed your fish the following.

At this point, you have gained insight into what bloodworms are, who eats bloodworms, where to get bloodworms, and how to breed them.

Live, freeze-dried, and frozen bloodworms are rich in iron and protein. Live bloodworms ignite fish’ hunting instincts to make great fishing baits. However, they can carry parasites and illnesses.

Your fish will not have as much activity eating frozen and freeze-dried food. But, these foods are less likely to make your fish sick.