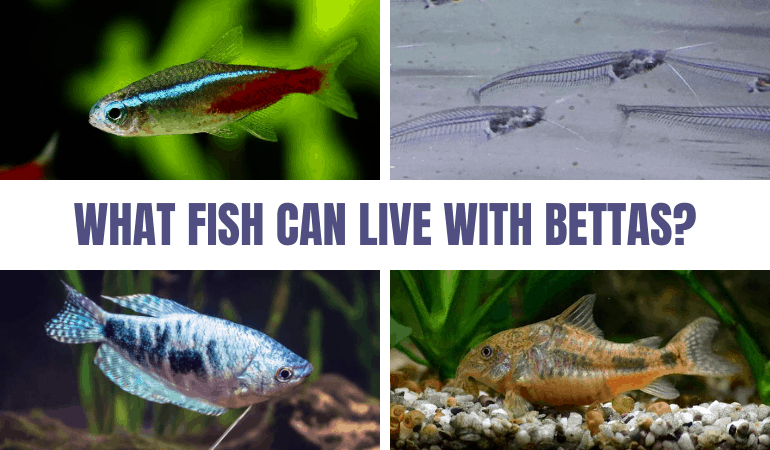 Once you know an alternative name for betta fish is ‘Siamese fighting fish’ (sometimes Japanese fighting fish) you may wonder what fish can live with bettas without fighting.

Well, there are plenty of fish that can live with bettas peacefully and this guide will hopefully give you some ideas that will brighten up your betta fish tank. Although known to have aggressive tendencies (we like to say added personality) having other fish, even with male betta fish, doesn’t have to be a problem.

The Quick “what fish can live with betta fish” Checklist.

*Bottom feeders are fish such as Plecos / catfish. ‘Sucker mouth fish’ that tend to stay at the bottom of the tank eating algae from the tank.

The size and set up of your aquarium is important before adding tanki mates. Check out our thoughts of the best betta tanks here.

FAQ – Can two betta fish live in the same tank?

No, particularly when talking about two male betta fish. You should not have more than one male betta in the same tank. Betta fish are very territorial, not only will the two males end up fighting but the fact they are sharing the same space will stress your betta.

It is possible to have more than one female betta fish in the same tank. Although they are still aggressive female bettas can live together in groups and they look beautiful. Tanks with multiple female betta fish are called betta fish sorority tanks and will require a little bit of research before going ahead. Luckily we also have a guide on that!

We are about to go through a few suggested betta fish tank mate ideas. Once you know what fish can live with bettas you will see that owning betta fish with other fish is a lot of fun because it brings so much variety to your aquarium.

Neon Tetra tend to stay around the mid-tank area, keeping their distance from any bettas so they will often get along. A large / long tank is recommended as tetras are schooling fish. You will need to have a minimum of six tetras in your tank – however, it is a good idea to have more (approximately 10 to 12 is sufficient). Once your tank features a colorful school you will see that keeping betta fish with other fish is not such a problem at all.

You need to be careful with tetras as they are known to be fin nippers (and we don’t want our betta’s delicate fins nipped). Neon tetras kept in a school are generally ok, however if you are tempted by other species of the tetra family always research into whether they are fin nippers. A little fish nipping at your betta fish’s long flowing tail is going to end with stressed fish and casualties!

The Bristlenose plecos are very shy, and they tend to be very reclusive. There are other various types of plecos that can live with the betta; however, some of these can become quite large. A bigger betta fish tank may be needed in time.

Having Plecos as a betta companion is generally a good partnership as the Plecos tend to stay out of the betta fish’s way. You will often find them at the bottom of the tank and feeding on algae from a piece of driftwood (which in turn keeps your tank cleaner longer).

The glass catfish are a cool species – they get their name as they are completely see-through (even can see the internal organs – weird eh?)! They are a very calm fish that should not pose any threat to your betta fish. The glass Catfish do best in small groups, they will spend most of their day together at the bottom of the tank beside the plants.

The blue gourami makes a great tank mate for a betta fish. These two fish are closely related meaning that the needs and conditions of the tank are the same for both fish – perfect!

The Blue Gourami does need a larger tank of around 20 gallons. With this factor met the Blue Gourami should be able to live peacefully with a betta fish.

Check out this video of a Khuli Loach living with a Betta fish and a Pleco – all enjoying some brine shrimp treats!
Skip to the 55 second mark to see mr Betta! 🙂

What fish can live with bettas… ok, so these aren’t exactly fish…

The African Dwarf Frog and a betta fish are a common tank partner. There are many stories of success between these two tank mates and they are general quite easy to care for. One thing to mention for this tank partnership is that thy have the same diet. While this is a good thing in that they can eat the same food it is bad as the African dwarf frog is a rather passive eater be careful that your bett does not over eat and that your frog eats enough!

Depending on the size of your tank, you should try to put between eight and ten ghost shrimp in with your betta. However, betta fish have been known to make short work of these small ghost shrimp so it all depends on the aggression and personality of your betta. Try and choose the bigger shimp from the pet store – they have better chance at surviving and not just become a meal.

So, now you have a better idea of what fish can live with bettas. Armed with this information, you should be able to maximize the visual pleasure of your betta fish tank.

Do you have any suggestions of your own for what fish can live with bettas? What fish shares a tank with your fighting fish? We would love to hear them in the comments below!

Did you find this interesting? So will your friends! Use the buttons below to share with your friends and the world! 🙂