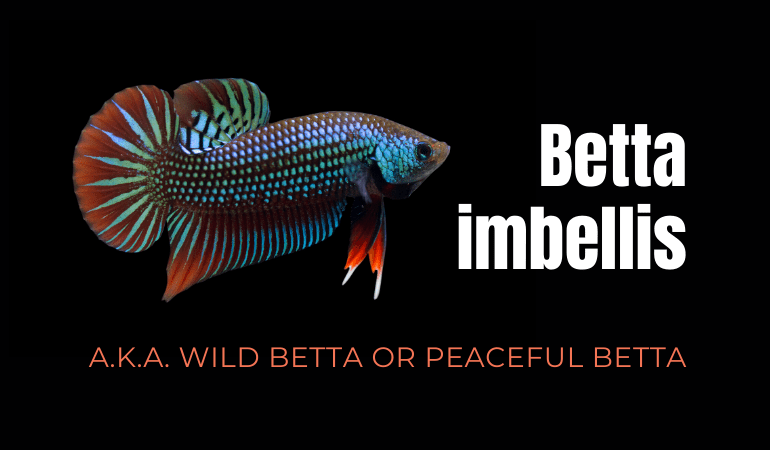 When thinking of the popular Siamese fighting fish, the breed that usually comes to mind is the Betta splendens. However, there are several different varieties of the colorful and entertaining betta fish, including the Betta imbellis, also known as the peaceful betta or the crescent betta.

How do these two species differ? To properly care for a Betta imbellis you will need to learn the key differences between it and the Betta splendens, so you choose the proper environment leading to a long and healthy life for your fish friend.

Betta imbellis share many of the same characteristics of their cousins, the Betta splendens. They are both colorful and have beautifully shaped fins. They are both originally from swamps or small, shallow ponds in Asia and have been bred in captivity for better color, overall appearance, and health. They are also both somewhat aggressive.

However, there are also many differences between these two fish.

When it comes to Betta imbellis vs Betta splenden, perhaps the most significant difference is their temperaments. The peaceful betta got its nickname because it is actually much gentler than many other betta types.

Unlike other betta varieties, including the Betta splendens, which can be quite aggressive, the peaceful betta can be kept with other calm fish. When given enough aquarium space, it can also be kept in pairs or, in even larger aquariums, in multiple pairs.

Appearance of the Betta Imbellis

Betta imbellis usually grow to about two inches long. They are available in a wide range of colors but usually have black or brown bodies with splashes of iridescent blue or green scales like the Betta smaragdina, particularly near the gills.

The fins are often a brighter, bolder blue, and the fins may be bright red at the edges. Males usually display brighter colors than the females and often have larger fins. As mentioned above, Betta imbellis have rounded fins, with a tail fin shaped like a crescent.

Betta imbellis generally live for about four years in captivity. This lifespan could be slightly extended if the fish receives excellent care and a varied, nutritious diet.

These bettas aren’t too picky when it comes to water parameters or temperature, as long as the water is kept clean. They can be kept in fresh or brackish water, although freshwater is better.

The pH level isn’t crucial, as long as it remains stable. Similarly, the water temperature can range from 70 to 82 degrees Fahrenheit. The temperature must remain constant, without any large fluctuations.

The peaceful betta originally comes from densely planted areas, and it’s best to mimic this in the home aquarium. Providing plenty of plants also gives the bettas places to hide.

Caves, either premade or constructed from securely placed rocks, can also be added to the aquarium to provide more hiding areas. This is especially important when keeping a pair, as it gives the female a place to hide if the male becomes moody or aggressive.

Betta imbellis are generally considered to be easy to care for as long as they have the proper amount of space and plenty of places to hide from other fish.

These fish also prefer to have a well-shaded aquarium as this mimics their natural habitat. Providing plenty of tall or leafy plants can help with this.

The water in the aquarium should be kept clean and aerated. However, it’s important to use only a gentle bubbler and filter so as to reduce water movement. Bettas are not used to swift currents.

The Betta imbellis is carnivorous, so it should be fed a variety of meaty foods.

Most captive-raised bettas will accept pellets or flake foods. However, it’s often best to supplement these premade foods with live, frozen, or freeze-dried meals, such as bloodworms, daphnia, and brine shrimp.

Offering a variety of foods will ensure that the peaceful betta receives the correct vitamins and nutrients, which can lead to brighter colors and a longer lifespan.

Bettas should be given a small amount of food twice a day.

The peaceful betta is relatively easy to breed, especially when they are already being housed in pairs.

Like most betta species, the Betta imbellis uses a bubble nest. Before spawning, the male will build this bubble nest near the water’s surface, often using plants as an anchor. The female will lay her eggs, and after the male fertilizes them, the pair will carry the eggs into the nest, securing them in the bubbles.

After the eggs have been laid and placed in the nest, the female can be removed from the tank. The male Betta imbellis will continue to care for the eggs until they hatch, usually within one to two days.

After another two days, the young bettas will be able to swim on their own. At this point, it’s best to move the male fish to another tank to avoid any of the fry being eaten. The fry can be fed liquid food for the first few days before switching to baby brine shrimp or microworms.

The price for a Betta imbellis varies depending on the color of the fish. Fish with brighter colorations are often more expensive and may cost $60 or more. However, most Betta imbellis cost between $10 and $20.

How to Choose the Perfect Fish

When choosing a betta, it’s always best to check the fish’s overall health.

Stay away from any stores or breeders who have sick or dead fish in their tanks.

When observing at the Betta imbellis, look for fish that have strong colors and flowing fins without any white or black spots at the edges. In addition, look for white spots or ulcers on the fish’s head and body. The fish should be swimming freely, and the gills on both sides should open without issue.

Choosing a healthy fish ensures that you’re getting a pet who will live with you for many happy years to come. It also helps to encourage fish breeders to take good care of their stock.

Thanks to its beautiful colors and peaceful nature, the Betta imbellis is a popular choice for both beginners and experienced fish keepers.

Although the Betta imbellis is not quite as flashy as the more common Betta splenden, it can be kept with other fish, including other betta imbellis, and, when given the proper amount of space, will enjoy a long, healthy life.

If you are looking for a betta that’s easy to care for but has an energetic personality, this might be the perfect fish for you.

Have you raised a Betta imbellis, or do you have questions about the breed? Comment below and let us know!