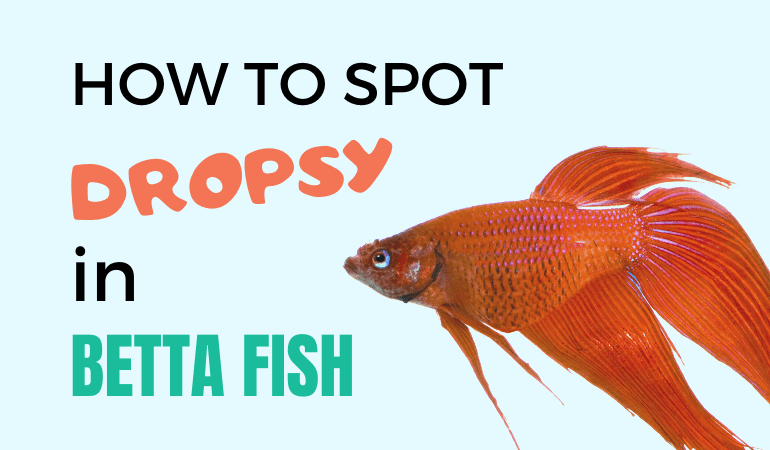 Caring for fish can be a tricky challenge, especially for beginners. There are many health problems that can cause harm to your fish. Betta Fish are a hardier choice but occasionally, even Betta’s can fall sick with certain ailments.

This article will teach you the first signs of dropsy and how it works in the Betta’s body. We will talk about how to cure dropsy in betta fish and go over some common ways to prevent the infection with easy to follow steps.

Dropsy isn’t a disease, but rather a bacterial infection that can build up on the fish. This is a very common ailment and pretty easy to spot if you learn the signs and properly observe your fish. If not quickly treated though, dropsy is fatal and can quickly diminish the life of your fish.

The bacteria slowly makes its way into your fish’s scales. It affects the kidneys, liver, and makes your Betta’s body start to retain unnatural amounts of fluids. The fluid buildup makes the fish uncomfortable, resulting in the loss of normal functions like active swimming and eating.

The fluid buildup grows until your fish’s organs are literally pushed completely aside. The infection will only appear in a betta fish with a compromised immune system. The cause for this is typically unclean water.

Often Times Dropsy is a secondary infection and should always be treated as such!

Dropsy will alter the appearance of your Betta. You may notice that your Betta’s scales are poking out unnaturally, kind of in a pinecone pattern. The fish will also look bloated and noticeably bigger than they were a few days ago.

You may also notice that they start to look bug-eyed, or that their eyes are popping out like Betta popeye. The gills on your Betta will lose their color and become pale. Spine curvature is also common due to the bloating unnaturally shaping the body.

Activity-wise, the fish will start to swim around less and just kind of float. They will stop eating or only nibble at their food. There also could be noticeable discoloration in their droppings or they may stop swimming near the top of the tank.

These symptoms will worsen as the infection progresses and alter your fish’s body with the fluid retention. The fluids will slowly push your fish organs to the side and create anemia. At the sign of any of these symptoms, treatment should begin immediately to save your fish’s life.

The bacterial cause of dropsy is generally the Aeromonas, a gram-negative bacteria that doesn’t react to common testing. It is considered a serious strain of bacteria that will act quickly once it’s in the environment. A number of factors can contribute to the appearance of dropsy.

Dropsy can come from a number of causes that weaken your fish’s immune symptoms. Generally, this is all linked back to your fish becoming stressed in their environment. It should be noted that this won’t occur from short-term stress from things like cleaning a tank and only comes from long-term factors.

The most common cause of dropsy is from poor water quality or an unclean environment. Unstable water temperature is another common factor; this can include your fish being kept in a cold environment.

Other possible causes are irritants like aggressive tanks mates. Poor nutrition can also lead to your fish’s weakened immune system. Finally, long-term transportation can lead to Dropsy, meaning it can be common in improperly imported fish from pet stores.

How to treat dropsy in betta fish

Dropsy is a hard to cure infection, that many fish experts argue over. Despite this though, there are a few ways to save your fish from Dropsy; especially early on. First and foremost, remove your betta from the afflicted water, especially if they have tank mates,

To move them safely set up a hospital tank with clean water – look at using aquariums salt or epsom salt bath for betta. It is recommended that you had one teaspoon of salt per gallon of water, to help sanitize the water. (always follow the instructions on the packet)

Next, start feeding your fish high-nutrient foods. If the fish is at the beginning stages of infection, then proper nutrition may be enough to offset the bacteria. If your fish doesn’t seem to be improving then we move on to using medication.

To treat Dropsy you will need an antibiotic that gets rid of all gram-negative bacteria. If used properly most medicine will cure your fish within a weeks time. Most fish experts recommend up to 10 days of treatment to ensure the bacteria is gone.

Once you see improvements in your fish, keep watch on them for about two weeks. It’s recommended to keep them in the hospital tank on their own during this portion of time. During this period be sure to keep the water as sanitary as possible to keep the infection from flaming backup.

Preventing Dropsy can be a relatively easy process. One of the main things you need to do is simply keep the tank clean. Make a weekly to bi-weekly cleaning schedule and stick to it.

You also should make sure to change the water out regularly. While you’re changing the water also make sure that all filters within the tank are cleaned. If the tank seems to be getting dirty to fast, consider a filter replacement.

To help cut back on tank cleaning, try to feed your betta pellet food. Pellets are easy to keep an eye on, watch him eat them. If any drop and you don’t have some bottom feeders to feast on the fallen / uneaten food then use a pipette to pick up the debris.

Finally, make sure that all the fish in your tank have appropriate space. If you notice any nipping or chasing, consider that your tanks overcrowded. Loss of territory or an aggressive tankmate can make stress levels rise rapidly.