Algae eaters can help curb algae growth in Betta tanks. However, since Bettas are far from peaceful fish when faced with unexpected visitors, you’ll need to choose the right algae eaters to save yourself the trouble of an acrimonious community tank.

We’ve made a list of the best algae eaters for a Betta tank to help you make the best choice. With tank mates like the ones described in the article, your Betta fish should be able to live and let live while they get down to business removing algae.

Snails are the perfect tank mate for small fish like Betta. They’re slow-moving and tranquil creatures. Some of the tiny members of the snail species can be the best algae eaters to have in a small aquarium. However, other snail species that grow to be big can also put away algae in a roomier tank.

Malaysian Trumpet snails are amazing algae eaters to have at the bottom of a fish tank. They’ll consume algae and plants that drift to the substrate and only feed on live plants when there’s no other food source.

You won’t find a Malaysian snail taking care of business during the day as they’re nocturnal.

However, they’ll still help keep your tank clean by hovering up all the algae they find on the tank bottom.

Unlike other species, Ramshorn snails won’t eat live plants in your tank. However, these avid algae eaters may feast on dying plants in addition to algae.

Although Ramshorn snails have a relatively short lifespan (about a year), they breed like crazy, so you’ll be saving money with these self-replicating algae eaters. With that said, bear in mind that overcrowding can become an issue when you leave these amorous snails to their own devices.

You shouldn’t have any issues adding Ramshorn snails to your tank, as these snails will be okay living in the same water conditions as your Betta fish.

Rabbit snails grow to about 5-inches long and are best suited for algae-eating duties in a large aquarium water tank. These snails won’t come into contact with Betta fish, preferring to spend their time grazing where algae grow.

Ironically, Rabbit snails don’t live up to their name regarding the rate at which they breed. So, you don’t have to worry about dealing with a tank full of the critters the way you would with other snail species.

Shrimp are good algae eaters for modestly-sized Betta tanks because they require very little space and are okay with the same water conditions Betta fish need for survival. The following shrimp eat algae and get along with Betta fish while doing so:

Amano shrimp will help keep a Betta tank algae-free for at least three years (which, by the way, is how long they live). Thankfully, these shrimp dwarf other shrimp species, meaning they’re large enough not to fall on your Betta’s lunch menu.

Another thing that makes Amano shrimp ideal for curbing algae growth is their diverse food palate. So while they’ll be perfectly okay gorging on algae, Amano shrimp will also gobble up uneaten food that lands on the tank bottom (which helps keep the water clean and nitrate levels down).

Ensure that your tank has good hiding spots and plants when adding these shrimp. They’ll need the shelter because they molt often and won’t come out until they have hard shells.

Bamboo shrimp have an unusual way of ridding your tank of algae in that they filter feed from the tank’s water currents. As such, there will be no point in adding this algae eater to your tank if you don’t have a filtration system going.

These shrimp will grow to 3 inches long and require company, so we recommend you only add a small group (2-3 shrimp) to a pretty large tank (about 55 gallons or more).

Also known as feeder shrimp, Ghost shrimp are excellent algae eaters who’ll get along swell with territorial and aggressive fish like Bettas. Eating algae is their specialty, and they’ll even eat hair algae.

These shrimp can live in the same water conditions as Betta fish, making them great tank mates and great algae eaters.

Ghost shrimp thrive in small groups, so you’ll need to add at least two to four to get the algae-eating operation going. Additionally, you can expect this algae eater to live for about a year and, in that time, grow to about one and a half inches long.

If space is your reason for not including algae-loving aquatic creatures into your tank sooner, you’ll be interested in knowing that Cherry shrimp are among the smallest algae eaters. These tiny shrimp love eating algae and don’t require too much food. You can give these shrimp algae wafers, and they’ll be just fine.

Cherry shrimp live for two years and only grow to be about two inches long. Their tiny size means they can get at algae growing in hard-to-reach spots. Unfortunately, their tininess also means your Betta fish might see them as a meal, especially their young (when the Cherry shrimps in your tank breed). So, add hiding spots to the tank before including this algae eater.

In addition to the snail and shrimp species discussed above, you can introduce bottom-dwelling fish as your Betta’s other tank mates. Not only will they keep the algae down, but they’ll also stay out of your Betta’s way.

In addition to their algae-eating prowess, there’s another reason to include Plecostomus in a planted tank: they’ll consume plant waste. However, avoid getting a common Plecostomus as they can get quite big. Instead, choose species like Pitbull, Bristlenose, and Clown Plecostosomus as these species are smaller.

Plecos have spines on their body, which can deter Betta fish attacks. However, despite their prickly exterior, these fish aren’t aggressive.

The Bristlenose Plecos are excellent bottom-feeding algae eaters to introduce to your Betta tank. They can subsist on a mostly-algae diet. However, you’ll need to include protein to maintain their health (frozen shrimp and Daphnia work great for that purpose).

You can expect your Bristlenose to grow about five inches long and live for five years. As such, these algae eaters are best suited for tanks that are a minimum of 25 gallons.

Known for their feline-looking whiskers, some species of this diverse group of fish can consume your Betta tank’s algae. Here are some catfish that can handle the job efficiently.

There are a few reasons why you should include Corydoras catfish in your Betta tank to solve your algae problem. The first reason is they’re bottom dwellers, meaning the likelihood of them venturing higher than the bottom of the tank and into the path of your Betta fish is slim to none.

If these fish come into contact with a Betta fish, they’ll be able to withstand an attack.

Corydoras aren’t voracious algae eaters per se. However, they’re effective at keeping it under control. On average, these catfish grow to be about 2-3 inches in length, so you’re better off introducing this type of algae eater into a bigger tank. Additionally, these hardy fish are very social, so you need to add more than one to a tank.

A small school of Whiptail catfish can be all you need to keep your Betta tank free of algae. These fish grow to be 4-inches long, so you’ll need to keep them in a spacious tank (at least 20 gallons).

This species of catfish lives up to fifteen years and won’t bother your Betta fish in that time.

The Otocinclus catfish is a small algae eater that’ll spend most of its time at the bottom of a fish tank. You’ll find these fish swimming in a school of multiple fish in the wild, so despite their small size, it’s best to introduce them to a spacious tank.

These catfish live to the ripe old age of five and will spend that time gobbling up algae on your tank’s substrate.

If you had only one reason to include Siamese algae eaters in your tank, do it because they devour algae on plants with surgical precision. Unlike some algae-eating snails, these algae eaters will leave the plants unscathed when doing their honest work.

Compared to other fish, the Siamese algae eater is long-lived, with a lifespan of ten years.

In that time, they’ll grow to be six inches long, so you’ll need a big tank if you’d like to include these guys in your aquarium.

It’d be best if you considered whether it’s worth it to get an algae eater for your tank or not. First, you might want to ask yourself: What are some factors that cause algae growth in my tank? The answer is uneaten fish food, a low-quality filter, and a bright tank or room lights.

Many of the above causes can be tackled without the need for an algae eater. For example, when there are algae blooms due to bright tank or room lights, curbing their growth can be achieved by turning down light sources to prevent them from photosynthesizing.

Meanwhile, getting rid of uneaten food can be achieved by cleaning your tank regularly, while a low-quality filter can be swapped out for a better one.

At the same time, introducing an algae eater into a fish tank is an investment in time and money. Some of the algae eaters mentioned above will even outlive your Betta fish, making it pointless to put them in the tank. Also, your tank’s size should give you pause as you’ll need to get a bigger one if it isn’t big enough.

Though all of the above makes a hard case against them, we don’t mean to discourage you from getting an algae eater.

However, you must realize these creatures are a commitment, not just an excellent, temporary way to solve your algae problem.

Can two different algae eaters be in the same tank?

Yes, they can. For example, including Ghost shrimp and a bottom-dweller in the same tank won’t result in the shrimp being eaten by the bottom-dweller and vice versa.

Why should I get rid of algae?

Algae can’t harm fish or mess up water parameters. Moreover, they may even reduce the nitrates in the water (the way most live plants do). Therefore, getting rid of algae is purely for the sake of aesthetics. If left unchecked, algae may cause your tank water to take on a cloudy green color, which will make it hard to see inside your tank.

Which algae eater can consume the most algae?

Cherry shrimp stand out as the algae eater capable of consuming the most algae. Their tiny size allows them to get at algae in the hardest-to-reach spots.

Yes, they are. Mystery snails eat hair algae and will eat algae off plants, glass, and tank decorations.

Curbing algae growth in your Betta tank can be as simple as introducing an algae eater into the aquarium water. Specific snail species, shrimp, and bottom-dwellers love to eat algae and won’t arouse your Betta fish’s territorial instincts by venturing where they’re not welcome.

When choosing an algae eater, bear in mind that it may be necessary to upgrade your tank if it’s too small. Some of the algae eaters discussed (the bottom dwellers mainly) grow into very large adults. 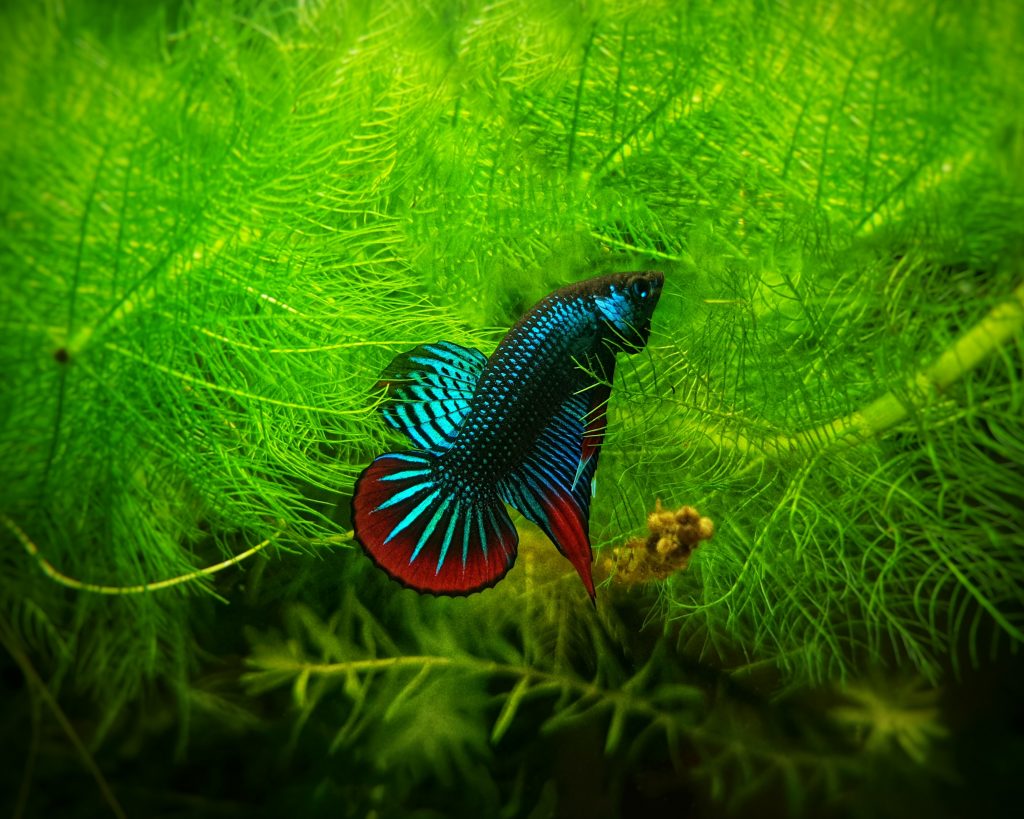 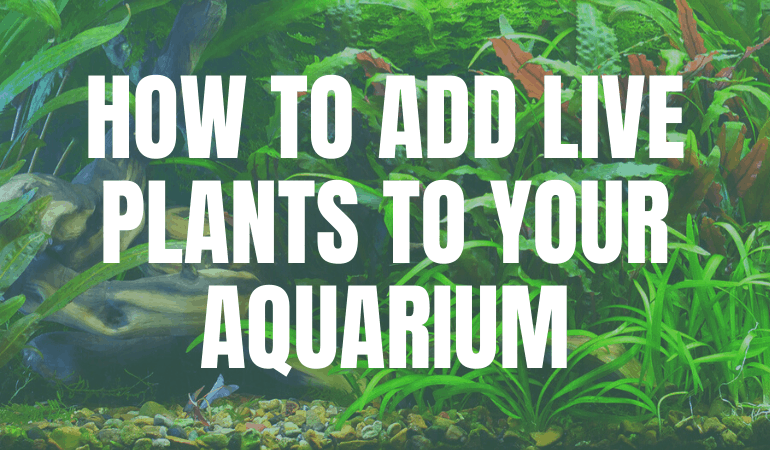 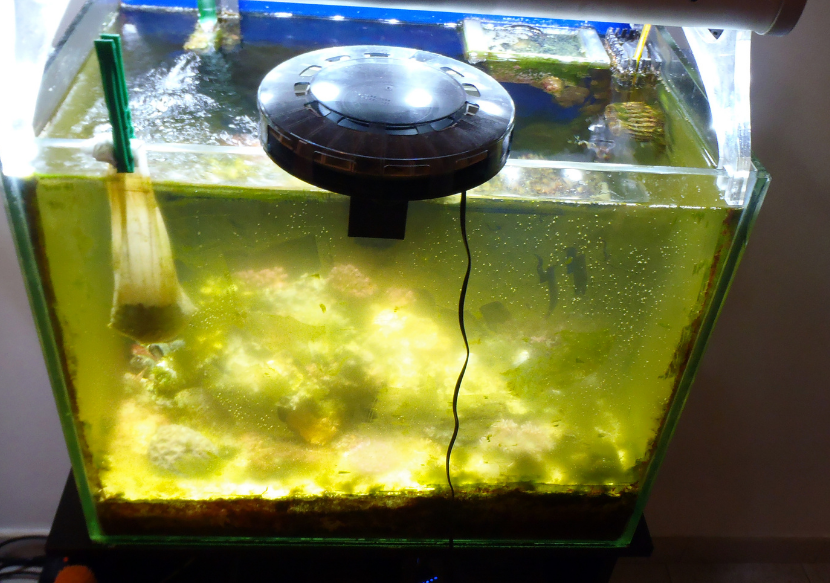