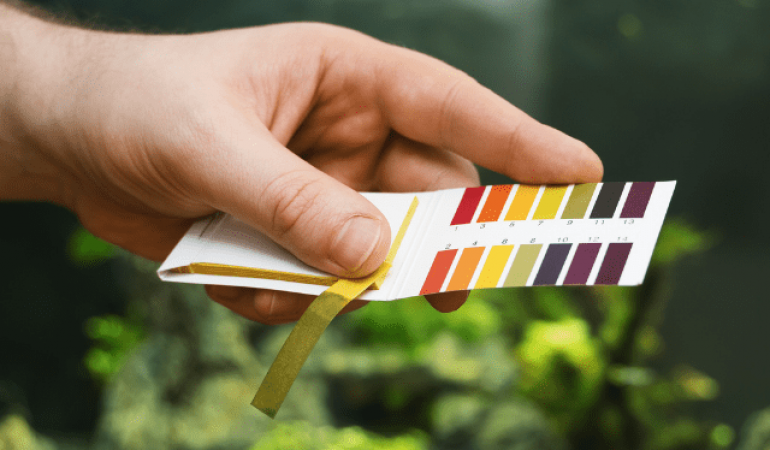 One thing that fascinates me is the way water pH level shifts in an aquarium.

From one-gallon Betta fish bowls to aquariums that hold hundreds of gallons, there is a definite pattern.

When you first start an aquarium, you will be more concerned about high hydrogen ion concentrations, or acidic pH.

Later on, almost everything thing you do will be aimed at reducing alkalinity.

Knowing what causes high pH in an aquarium will help you keep fish healthy as the habitat ages. 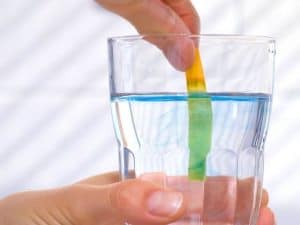 Once you get past new fish tank jitters, there is still more to the learning curve.

Regardless of how much you hear “Don’t fool with the water, especially the pH”, there are times when it is necessary.

Simply knowing the pH scale isn’t enough. You have to know what is going on with other parts of the water chemistry. In particular:

Each of these factors can do more than simply lead to failure in pH adjustment. The very act of adjusting the pH can have a negative effect on other water chemistry factors.

Addressing those parameters can be far more difficult and lead to fish death.

Bacteria that break down ammonia and nitrites have an optimal pH range just like any other aquatic creature. If the pH goes below 6.5 or above 9.5, it can kill off nitrifying bacteria.

Once the pH varies in either direction away from the optimum of 7.7, bacteria activity will also slow down.

This, in turn, has an impact on the amount of ammonia and nitrites processed by the bacteria. When bacteria don’t process all the ammonia, there is a chance for it to convert to ammonium.

While the ammonium is harmless to the fish, it does convert back to ammonia when the pH goes over 9.0. This is considered a high pH for freshwater fish aquariums.

To make matters worse, when ammonia processing bacteria don’t convert ammonia to nitrites, there is no way for it to be converted by nitrifying bacteria into nitrates.

Since plants need nitrates to survive, the slow down in nitrifying bacteria also has an impact on them.

When plants don’t grow as quickly, this also affects the pH through daily fluctuations in carbon dioxide levels.

Carbon Dioxide And Its Role In Aquarium pH 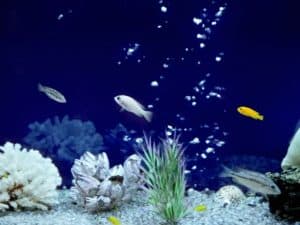 Carbon dioxide impacts the pH of aquarium water through many different systems.

At night, when the plants and algae aren’t taking in carbon dioxide, other creatures in the tank continue to excrete this molecule. This, in turn, causes a drop in pH since the plants aren’t balancing it out.

4 Factors That Drive Aquarium pH Up

In a natural ecosystem, there aren’t just one or two factors that affect pH. By the time you take into account cascading events, you could be looking at hundreds of factors.

No matter how much you try to create a natural habitat in your home fish tank, it will never precisely duplicate a purely natural setting. As a result, there are fewer variables that affect pH.

Here are 4 that are the most likely to create a high pH in your aquarium. Depending on the actual setup of your tank, there may be others.

1. New Tap Water or other Water Added to the Tank

If the pH of the tap water or other new water is alkaline, it will lead to a high pH.

Before you add tap water or other types to an aquarium, it is very important to test KH or carbonate hardness. This type of dissolved mineral serves to buffer or reduce swings in pH.

In order for oxygen to get into the fish tank water, the surface tension of the water must be broken. This is why air stones, filters, and other devices should always be positioned to break as much surface tension as possible.

Check out this video to see how fish breathe!

Getting enough oxygen into the water is always important. Most oxygen enters the tank at the surface where the tank water meets the air.

This is also where some carbon dioxide leaves the fish tank, which can create a high pH. If the tank is low in carbon dioxide because of daytime plant and algae activity, then aeration won’t do much to raise the pH of the aquarium water.

To find out how much of an impact adjusting aeration would have, you need to use a carbon dioxide testing kit to see how much is in the tank.

Take the measurements every 4 hours over 24 hours to see how the levels change.

Natural items such as wood and seashells break down in the water.

Certain kinds of gravel, stones, and other substrates can also leach molecules that change the pH of the water.

The amount of breakdown or leaching may also depend on the current pH of the water and its impact on the material. For example, crushed coral will stop breaking down if there is a high pH.

On the other hand, the lowering effects from peat moss will continue regardless of whether there is a low or high pH.

4. Plants, Algae And Other Aquatic Creatures

Plants, algae, and animals in the tank all have cells as their basic unit of life. The cells found in plants and algae, however, function differently from those found in animals.

In particular, plant and algae cells use carbon dioxide to create the energy they need for metabolic functions. The waste product from this process is oxygen.

By contrast, animal cells use oxygen to create energy and excrete carbon dioxide as waste.

When these organisms are in balance, then the effect on the pH will cancel out each day because the carbon dioxide is being fully processed by both groups of creatures.

Managing pH In A New Tank

One of the most important things you can do is establish a stable pH as early as possible during the first year of operation.

It is best to reserve partial water change, peat moss, baking soda, and other chemical adjustments for emergency purposes.

To create a stable pH aim to use natural resources like plants in balance with the number of animal-based creatures in the tank.

After the pH stabilizes using long-term means, there is a much better chance that it will remain in that condition for years.

Just be sure to continue doing the water testing for ammonium and carbon dioxide fluctuations along with pH and hardness (GH and KH).

This will help you uncover trends earlier that may express in fish illness sooner or later.

How often should you test the pH in your aquarium?

You should test the water weekly during the first year of operation.

After that, you can test bi-weekly as long as the pH is stable without the addition of chemicals or other additives.

If the pH is only stable because of continued intervention, you should continue to test weekly.

What are the signs of pH stress in fish?

This depends on the species of fish. Some will dart around and swim chaotically. Others may become sluggish or swim in depths of the tank that aren’t normal for their species.

Most fish will also show signs of gill distress by pumping their gills rapidly in the presence of high pH. You may also see signs of mucus and gill swelling.

Changing the pH has an enormous effect on fish health. Once fish adapt to a stable pH, their gill function also changes in terms of how oxygen and carbon dioxide are exchanged.

If you suddenly change the pH, the fish’s gills will not work as well.

Since many pH adjustment solutions, including peat moss, also change the hardness of the aquarium water, this can have devastating effects on swim bladder function.

Once you understand the main drivers of high pH levels in your aquarium, it will be much easier to keep the pH stable without constantly adding chemicals.

Understanding what drives pH up, in particular, is also very important for the long-term health of all the inhabitants of the aquarium.

This includes the beneficial bacteria that every other creature in the tank relies on one way or another.