Home
Aquariums
How to Raise pH in an Aquarium: Effective Methods to Adjust Water Acidity Safely 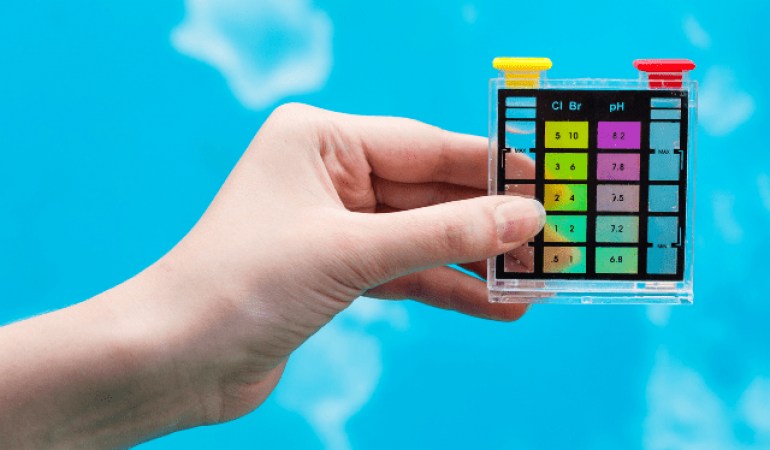 When I bought my first 6 feeder goldfish, I was told they accept a wide pH range. Naturally, I was surprised when they died within a week.

Since I didn’t believe feeder goldfish are any less capable of thriving, I did some research.

The fact is they, and several other fish do better with high alkalinity or high pH.

Knowing how to raise pH in an aquarium is a very important skill.

As your fish tank ages, the pH level will go up on its own.

Depending on the bioload and natural buffers, this process may go quickly or slowly.

If that process is slow and gradual, the fish will also adapt over time. Even fish that normally live in acidic to neutral water will adjust to a higher aquarium pH.

There are two times when the inhabitants of your tank are at most risk from an elevated pH level.   As a result, you will need to know how to raise pH in the aquarium. 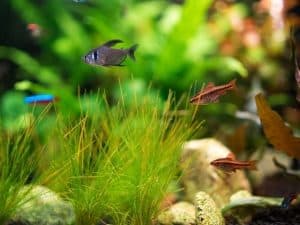 Most fish don’t live in pet store tanks for more than a few days.

Since pet stores buy juvenile fish from independent breeders, the fish are adjusted to those water ph parameters.

If the pH level in your tank is very different, then the fish will have problems unless you adjust the pH level to match.

Since juvenile fish are also more susceptible to pH fluctuations, you will have very little room or time to recover from a mistake.

Even though many chemicals will effectively raise the pH level and keep it stable, there is no such thing as one formula that will work for every fish tank.

Not all ammonia (NH3) in the fish tank water is broken down by nitrifying bacteria. Some of it becomes ammonium (NH4) that is harmless to the fish.

Even though NH4 poses little or no risk to the fish, you still need to test for its presence.

Over time, ammonium will convert back to ammonia. This occurs as the ammonium molecules encounter alkaline molecules.

Therefore, when the pH of the tank goes too high or is raised too suddenly, it can generate a deadly ammonia spike.

When you have aquatic pets that require a higher pH, knowing how to safely adjust the pH upward is critical regardless of when you need to do so.

Why You Should Never Adjust pH Upwards Without Assessing Water Hardness

Before you try to raise the pH of the tank, make sure you also know the current water hardness level.

There are two types of hardness you will need to measure.

Both are negatively-charged molecules that are bound to acidic, or positively charged ions. KH is essential for keeping the pH in an aquarium stable. Without its buffering effect, a deadly pH crash is much more likely to occur.

The Impact of Water Hardness on Swim Bladder Function 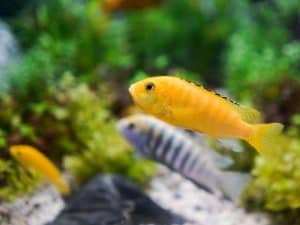 Depending on the hardness of the water where each species of fish evolve, it may hold onto minerals longer, or excrete them faster.

If there is too much mineral hardness in the water, the fish can’t get rid of it fast enough. This, in turn, prevents air from leaving the swim bladder.

These fish will hang at the surface of the water and have a hard time getting to the mid or lower regions of the tank. Eventually, their swim bladder will explode.

On the other hand, if the fish species evolved in hard water, they tend to excrete minerals very quickly.

If there is too little hardness in the water, the fish won’t be able to take enough minerals in to keep up. This, in turn, can prevent air from getting into the swim bladder.

Since the swim bladder is empty, these fish will get stuck in the bottom of the tank. Other essential functions will also stop as essential ions are leached from their bodies.

Just about every solution for raising pH will also affect GH, KH, or both. Therefore, you must always consider this impact and recognize when your efforts to raise the pH may cause other problems for the fish.

How to use pH Increasing Chemicals Made for Fish Tanks

The fastest way to raise the pH in your aquarium is to use one of the “pH Up” chemicals made for that purpose.

I don’t recommend using them for any situation other than an emergency, because many of them use baking soda.

The only advantage you have with these formulas is they give you very specific instructions that reduce the risks associated with using pure baking soda.

Depending on the amount of pH increase you are interested in, it could take a few days to a few weeks to bring the water up to the desired level.

Do not rush this process. Remember, the tank may have hidden ammonium that can kill the whole tank if the raised pH shifts it back to ammonia.

If you have soft water species in the tank, or the GH or KH is already high, make sure the product you choose won’t raise the hardness. Usually, these are “non-buffered” pH Up solutions.

Otherwise, you can use a buffered solution and its increased pH stabilizing effect.

Pros and Cons of Using Crushed Coral and Seashells 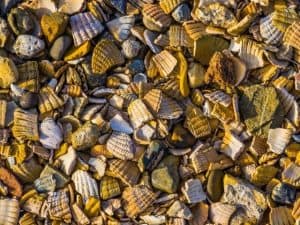 Crushed corals and seashells are both rich in calcium carbonate.

They are both natural additives that many people think offer a perfect solution to low pH levels in an aquarium.

While they do have some long-term benefits, they won’t work in every situation.

Here are some pros and cons to consider:

Dolomite is similar to crushed coral in the sense that it won’t dissolve further once the pH reaches a certain point.

Unlike crushed coral, dolomite increases the KH of the water, which provides an essential buffer. As with GH, increased KH levels can still pose a problem for soft water fish.

Usually, when I start a new fish tank that will have hard water fish in it, I prefer to use dolomite over crushed coral because of the more effective buffering.

Many people say it is perfectly safe to use baking soda, or sodium bicarbonate, to raise pH levels in an aquarium. As mentioned earlier, several pH Up formulations also use baking soda.

I don’t recommend baking soda because it releases carbon dioxide into the water. If the water is already low in oxygen levels, there is a good chance all the animals in the tank will suffocate.

Historically, baking soda has been used both to euthanize and anesthetize fish.

Unless you are absolutely certain of the doses you are using, this particular cheap remedy for low pH can do more harm than good.

What pH level is ideal for your aquarium?

The ideal pH for any given fish tank depends on the creatures living in it. Some fish and plants will thrive in acidic water, while others do best in neutral or alkaline water.

In general, many freshwater tropical fish species do best in slightly acidic water. Brackish and saltwater fish will do better in alkaline water.

Will peat moss raise the pH level in my fish tank?

Peat moss will soften the water, which actually drives the pH down.

Since this effect is also gradual, peat moss won’t do much in a situation where the hardness levels have gone too high while you were trying to adjust the pH level.

In this situation, your best bet is a partial water change using either distilled water or very soft tap water.

Will Epsom salts raise the pH in an aquarium?

Epsom salts do not raise the pH of the aquarium water. It does however increase KH, which can help stabilize the pH.

What are the symptoms of high pH in a fish tank?

When the pH level is too high, fish will be more stressed. They may scratch themselves against gravel or other objects in the fish tank.

Fish species that normally school together may not keep formation, and individuals may move abruptly.

Other fish may become very sluggish and have a hard time moving around.

You may also notice some gill pumping and mucus coming from the gills.

In a community tank, not all fish may have the same response to rising pH levels. Typically, fish that do better in acidic to neutral aquarium water will show symptoms of distress first.

Would you like to know how chemistry plays a major role in keeping the tanks just right for your aquatic animals? Here’s a short video before we wrap this up:

As a veteran aquarist, I am a firm believer in leaving the pH level alone as long as it remains stable and within species-specific safe levels.

During the first year of operation, however, your fish tank may need an upwards pH level adjustment. This includes heavily stocked tanks as well as ones with alkaline-loving fish.

Doing so safely requires an understanding of how each chemical works in terms of impact on water hardness and oxygen levels.